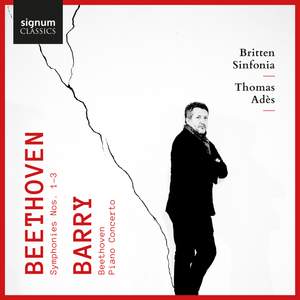 The highly anticipated recording of Thomas Adès and the Britten Sinfonia playing Beethoven and Barry; specifically, the Beethoven Symphony Cycle and a selection of Barry’s works. This double CD features Beethoven’s first three symphonies, interspersed with Barry’s piece Beethoven and his Piano Concerto.

Beethoven intended to stake his claim to be the rightful successor to the Viennese classical tradition with the first of his symphonies, premiered in 1800. He had already begun to lose his hearing by this point and when he composed his second symphony he placed on the page his spirit of defiance and determination against his deafness. The third marks a significant turning point in his style, as well as in the framework of how a symphony was expected to be composed.

Gerald Barry grew up in rural Ireland. His music shows us how his upbringing had an effect on his compositional style - giving a piece a title such as Beethoven would suggest an attempt at emulating his legacy nearly two centuries after his death. Do not be fooled by this however; his music shows his major influence from radio, moving from the sublime and the ridiculous with carefree abandon.

Despite their unrelenting manic energy, there’s a meticulousness to Adès’s accounts of Barry’s music that’s largely missing from his Beethoven...That said, the opening movement of the Eroica had me on the edge of my seat.

Quirky and touching in equal measure, Barry’s setting of Beethoven’s letter to his ‘Immortal Beloved’ has a similar madcap energy to the writing for Lady Bracknell (also written for low male voice) in the Irish composer’s marvellous chamber-opera The Importance of Being Earnest...Adès’s Beethoven, particularly the lightly-sprung Eroica, sounds fresh-minted without being self-consciously radical, and is the most striking orchestral contribution to this year’s anniversary celebrations that’s come my way.

The centrepiece of this set is, inevitably, Eroica. Adès approaches it with the sense of brisk clarity and lack of fuss that we have come to expect more from period instrument groups. This is chamber Beethoven, not lush grandeur, even if the orchestra is not particularly small. Barry’s Piano Concerto is really a rasping orchestral assault on which the solo piano commentates. His setting of three of Beethoven’s letters to his ‘immortal beloved’ is a scena that veers from complaints about the road from Vienna to Esterhazy to outpourings of unconsummated love.