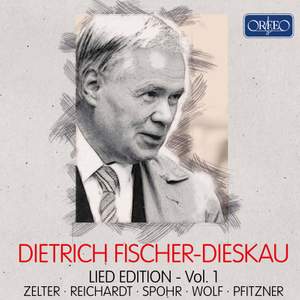 "Even a quarter of a century after the end of his active career as a singer, nothing has changed concerning Dietrich Fischer-Dieskau’s preeminent status in the history of performing song. It is a above all the Lied performer Fischer-Dieskau who set standards that have remained valid far beyond his time. This compilation from very different song worlds offers striking examples of this.

Vol. 1 of the “Dietrich Fischer-Dieskau Lied-Edition” presents Lieder by two almost forgotten song composers – Carl Friedrich Zelter (CD1) and Johann Friedrich Reichardt (CD2), who owe their significance not least to their affinity to Goethe, as well as a selection of songs by Lous Spohr (CD3), who is more familiar as the composer of instrumental concertos and chamber music, and by Hans Pfitzner (CD5), who takes us into a later period. Hugo Wolf’s last and perhaps most popular cycle, the Italienisches Liederbuch, was an unparalleled recital experience at the Mozarteum in Salzburg in 1958 (CD4). Studio recordings with other partners did not find the same spontaneity and brio as in that live recording with Irmgard Seefried and Erik Werba."