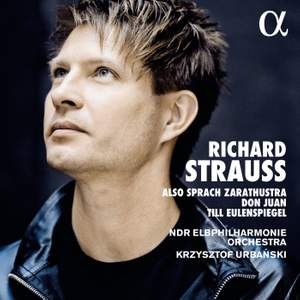 Is the imitation of rolling thunder, howling winds and bleating sheep a form of musical composition worthy of the name? Can we take seriously a composer who boasts of being able to ‘set a restaurant menu to music, if need be’? These were the kinds of questions that Richard Strauss, one of the most virtuosic composers of the so-called ‘programme music’, had to ask himself. His answer: ‘I am a musician from head to toe; for me, all “programmes” are merely incentives to invent new forms, nothing else.’ The NDR Orchestra, conducted by Krzysztof Urbański, has chosen to devote its sixth Alpha Classics recording to three of Richard Strauss’s most famous symphonic poems: Also sprach Zarathustra op. 30, Till Eulenspiegels lustige Streiche op. 28 and Don Juan op. 20.