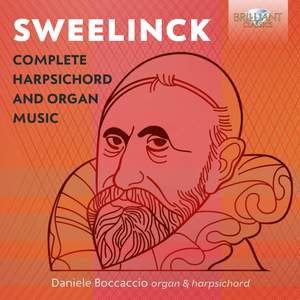 The only available complete set of Sweelinck’s keyboard music performed by a single artist: new and beautifully realised recordings.

‘A splendid recording by a fine artist’: Choir and Organ magazine on Daniele Boccaccio’s organ version of Bach’s Well-Tempered Clavier (95157) – the first ever such project. Now Boccaccio travels back several generations, to Jan Pieterszoon Sweelinck (1562-1621). This Italian-trained. Amsterdam-based organist/composer/teacher is the real father of the North German school, including not only the Bach family but also Scheidt and Buxtehude. All these composers were aware of and decisively influenced by Sweelinck.

Sweelinck's extant keyboard output comprises some seventy pieces. The precise instrument for which each of the pieces was written cannot always be determined with certainty. While the chorale settings most likely were intended for the organ and the secular song variations for harpsichord or virginal, Sweelinck's fantasias and toccatas (over thirty in number) may well have been played on whatever keyboard instrument was at hand.

He has chosen three different instruments for the organ performances: the Arp Schnitger organ (1678) in the Johanneskirche, Oederquart; a Fritz Scherer organ (1612/13) in the Marienkirche, Lemgo; and an instrument of unknown manufacture from around 1550 in the Andreaskirche, Ostönnen. The harpsichord is a modern copy of a 1679 model by the Flemish maker Jan Couchet. A project long in the making, this set will command the attention of all early- and Baroque-music lovers.

Jan Pieterszoon Sweelinck (1562-1621) was one of the most influential composers of the Late-Renaissance and Early-Baroque. He was organist of the Oude Kerk in Amsterdam for 44 years. His influence was enormous, he attracted composers from many European countries to Amsterdam to learn his art. Even the great Johann Sebastian Bach acknowledged his superior craftsmanship.

Daniele Boccaccio is one of Italy’s foremost keyboard players. A scholar as well, he did extensive research into historic sources. He plays 3 different historic organs and a copy of a Flemish harpsichord.