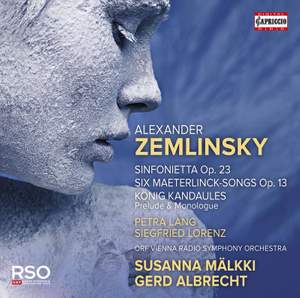 A superb programme of orchestral and vocal Zemlinsky, often revealing the composer in fraught mood. The playing combines passion with richness. — BBC Music Magazine, July 2020, 4 out of 5 stars

“I just heard your wonderful Sinfonietta: hope this is the beginning of your American success,” wrote Arnold Schönberg to Zemlinsky. But Zemlinsky was already suffering from the effects of a stroke and died alone in New York just a few days later. In his Sinfonietta, Op. 24 (1934) he reused a short theme from the last of his Maeterlinck-Songs, Op. 13 (1913), “Wohin gehst Du?” (Where are you going?), a theme of “self-doubts” and “farewell” from a time when Zemlinsky was beginning to observe growing anti-Jewish sentiments in Vienna. The Maeterlinck-Songs were praised as “the center of his output” by Theodor Adorno, and transport the listener to a mystic world concerned with life, evanescence and death.

A superb programme of orchestral and vocal Zemlinsky, often revealing the composer in fraught mood. The playing combines passion with richness.