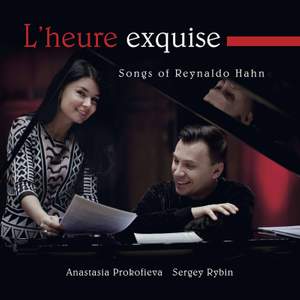 "L'heure exquise is a collection of 25 songs from one of the most admired masters of mélodie of La Belle Epoque: Reynaldo Hahn. The programme features many examples of Hahn’s well-known charming and delicate writing (À Chloris, Le rossignol des lilas, L’énamourée) alongside a number of less familiar melodies, only recently published in collected form. These exquisite illustrations of Hahn's genius (such as À une étoile, Dans l’été) were originally published in journals of the time, while some of the others were discovered posthumously (Naïs, Ta main). Two further rarities, Mon rêve était d’avoir and Au fil de l’eau, belong to the soundtrack of the 1934 film La Dame aux Camélias and were originally performed by Yvonne Printemps.