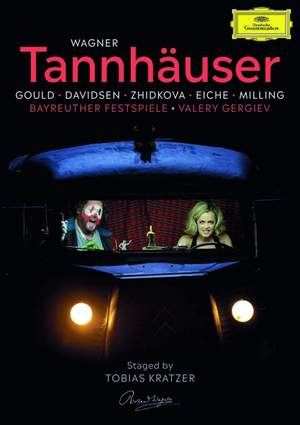 Kratzer has found an interesting frame story through which to parallel and illustrate the dramatic conflicts of Wagner’s early Romantic opera...The cast here play as a really tight company...[Davidsen]... — Gramophone Magazine, September 2020 More…

After Tristan und Isolde (2016), Parsifal (2017), Die Meistersinger von Nürnberg (2018) and the Grammy nominated Lohengrin (2019) this is the fifth installment of the exclusive, multiyear partnership between Deutsche Grammophon and the Bayreuth Festival, in which the Yellow Label is the exclusive audiovisual partner of the mythical Wagner festival, releasing each edition's new production on DVD, Blu-ray and eVideo.

This year, we are proud to release the new production of Tannhäuser which was premiered on 26 July 2019 and presented the long awaited Bayreuth debut of star conductor Valery Gergiev, as well as the house debut of young soprano star Lise Davidsen. Tobias Kratzer’s staging presented Tannhäuser as a wildly contemporary parable of art and freedom which was praised as “novel” and “wrenching” (New York Times) and received exceptional press acclaim. Lise Davidsen’s Elisabeth (“beautifully lyrical”, Telegraph) was as much acclaimed as heldentenor Stephen Gould’s Tannhäuser, who exhibited “great dramatic and vocal power in the title role” (Telegraph). They were joined by mezzo soprano Elena Zhidkova’s Venus (“scene stealing”, according to Opera Today), baritone Markus Eiche’s Wolfram and Stephen Milling’s Landgraf.

Kratzer has found an interesting frame story through which to parallel and illustrate the dramatic conflicts of Wagner’s early Romantic opera...The cast here play as a really tight company...[Davidsen] acts and sings as if she’s already spent a life on this stage...Hugely recommended, unless you’re irretrievably addicted to medieval recreation – and you’ll even get quite a lot of that here.