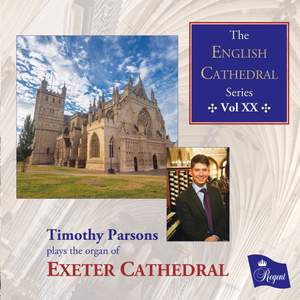 ...showcases the strength in depth of the musicianship in Britain’s cathedral organ lofts today. The Cathedral, and Timothy Parsons, should be rightly proud of this highly satisfying and well-executed... — Choir & Organ, April 2020, More…

Locke: Voluntary in A minor

Regent is delighted to announce the release of the twentieth volume in our on-going English Cathedral Series of organ recordings from Exeter Cathedral.

This is the debut solo recording from Exeter Cathedral’s brilliant young assistant organist, Timothy Parsons, and the first recording to showcase the Exeter organ following its major rebuild and restoration in 2014.

The programe combines popular virtuoso showpieces from the repertoire by Mendelssohn, Elgar, Vierne, Messiaen, and Duruflé, together with smaller-scale works showing the ravishing quieter colours of the instrument. Two of these works are by composers associated with Exeter Cathedral – Matthew Locke in the seventeenth century, and Samuel Sebastian Wesley in the nineteenth – and there are three chorale preludes by Brahms which beautifully demonstrate the rich flutes of the Exeter instrument.

There are two recent contemporary works: Mark Blatchly’s Andante Sostenuto for TJYP – written for Timothy Parsons – and Nico Muhly’s The Revd Mustard his Installation Prelude – written for the installation service of Muhly’s friend the Reverend James Mustard as Rector of St Mary the Virgin, East Barnet. James Mustard was subsequently installed as Precentor of Exeter Cathedral in 2018 a few weeks after this recording was made!

Timothy Parsons has been Assistant Director of Music at Exeter Cathedral since September 2016. He was a chorister at Guildford Cathedral and educated at Charterhouse before taking up the organ scholarship at Hereford Cathedral in 2010. He read for a degree in Music at Selwyn College, Cambridge, where he was Organ Scholar, and graduated with a starred first in 2014. Whilst at Cambridge he also held the organ scholarship for King’s Voices, the mixed-voice choir of King’s College Chapel. From 2014 to 2016 he was Organ Scholar at Winchester Cathedral, also serving for a term as Acting Assistant Director of Music.

The Exeter Cathedral organ stands on the medieval screen between the quire and nave. The first organ was built by John Loosemore in 1665 in what is generally regarded as one of the finest organ cases in the UK. In 1891 a new organ, using some of the older pipework, was built by Henry Willis, and this was re-built by Harrison & Harrison in 1931.

In January 2013 an extensive refurbishment began on the organ, again undertaken by Harrison & Harrison. The work consisted of an overhaul and a re-design of the internal layout of the soundboards, and some tonal alterations. The organ has one of only three trompette militaire stops in the UK housed, together with a new diapason chorus, in the Minstrels' Gallery on the North side of the nave.

...showcases the strength in depth of the musicianship in Britain’s cathedral organ lofts today. The Cathedral, and Timothy Parsons, should be rightly proud of this highly satisfying and well-executed programme.