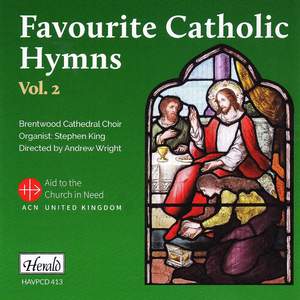 Traditional, Roderick Elms: My God, Accept My Heart This Day

Vaughan Williams: The Old Hundredth Psalm Tune 'All people that on earth do dwell'

J.B. König: Blest Are the Pure of Heart

W. Pitts: Jesus! Thou Are Coming

Walker, C: Because the Lord is my Shepherd

Stralsund Gesangbuch, Roderick Elms: Praise to the Lord, the Almighty

R.R. Terry, Andrew Wright: Praise to the Holiest in the Height

Brentwood Cathedral Choir perform a further selection of Catholic hymns, together with their director Andrew Wright and organist Stephen King.

This second volume of Favourite Catholic Hymns contributes a number of much-loved hymns to those featured in Volume 1 from the Choirs of the Diocese of Leeds. In addition to standard hymns heard in Catholic Services over the decades, there are also a number of hymns increasingly used after the Second Vatican Council from other Christian denominations, together with two contemporary liturgical pieces and two further plainsong melodies.

The Choir of Brentwood Cathedral was founded in 1984 and comprises boy and girl choristers, sopranos, contraltos, choir Gentlemen and Lay Clerks and sings regularly at the principal choralservices of the year in the Cathedral. The Choir has also undertaken a number of tours throughout Europe including tours to Belgium, France, Holland, Ireland, Germany, Italy and Austria. Notable visits have included Antwerp Cathedral (2002), St Peter's Basilica, Rome (2008) and Siena Cathedral (2009). The Choir also sang at High Mass in Notre Dame Cathedral, Paris in 2003 on the Feast of Candlemas. The Choir has undertaken a number of CD recordings and broadcasts, including, on the occasion of the 10th Anniversary of the Dedication of Brentwood Cathedral, the CD entitled Glory to God.