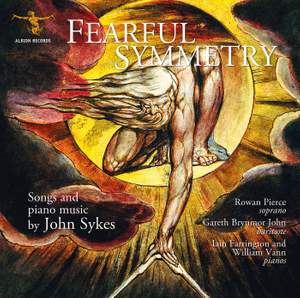 Sykes, J: Hear the Voice of the Bard

Sykes, J: The Garden of Love

Sykes, J: The Clod and the Pebble

Sykes, J: The Voice of the Ancient Bard

No. 1, Jean with Her Golden Grace

No. 2, My Mistress Played

This recording is of songs, solo piano works and a piano duo by John Sykes. The songs are largely settings from William Blake's poems of Innocence and Experience, but there are also settings of poems by Sykes's friend and contemporary, Randall Swingler.

John Sykes (1909-1962) was a pianist, composer and schoolteacher. He gained his FRCO as a schoolboy and became Organ Scholar at Balliol College Oxford. Later, he studied with both Ralph Vaughan Williams and Gordon Jacob. Albion Records is the recording arm of The Ralph Vaughan Williams Society, so it is Sykes's association as a pupil that inspires this release.

Sykes spent most of his career teaching music at Kingswood School, Bath. He left behind a good deal of music, with just a handful of published works. Most of his manuscripts remain in the school archives.

Rowan Pierce was presented with the President's Award by HRH Prince of Wales at the Royal College of Music in 2017. She won both the Song Prize and First Prize at the inaugural Grange Festival International Singing Competition, the Van Someren-Godfrey Prize at the Royal College of Music and the first Schubert Society Singer Prize in 2014. She has many recordings to her credit.

Gareth Brynmor John has been a winner of the Kathleen Ferrier Award, and the Royal Academy of Music Patrons' Award. He has performed in operas and song recitals all over the UK and internationally.

Iain Farrington is a pianist, organist, composer and arranger. He studied at the Royal Academy of Music, London and at Cambridge University. He has performed at all the major UK venues, as well as in the USA, Japan, South Africa, Malaysia, Hong Kong and all across Europe. Iain has composed several orchestral works for the BBC Proms.

William Vann is a multiple-prize winning accompanist and conductor. He is the Director of Music at the Royal Hospital, Chelsea, and the founder and Artistic Director of the London English Song Festival. In April 2019 he conducted Hubert Parry's long-neglected oratorio Judith in the Royal Festival Hall, which he has also recorded for Chandos Records.