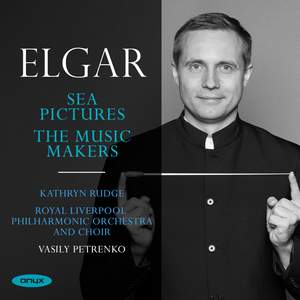 II. We are the Music Makers

III. We, In the ages lying

IV. A breath of our inspiration

V. They had no vision amazing

VI. But we, with our dreaming and singing

VII. For we are afar with the dawning

VIII. All Hail! We cry to the corners

Vasily Petrenko and the RLPO continue their critically acclaimed Elgar project with Sea Pictures and The Music Makers, with Kathryn Rudge as soloist. Sea Pictures is one of the composer’s most popular works and as an orchestral song cycle stands alongside those by Mahler and Strauss. The Music Makers however has had a more troubled history. Elgar had worked on it on and off from 1903 and it was premiered in 1912. Both words and music came in for criticism. Elgar quotes from his symphonies, and ‘Nimrod’ as well as other sources. It can be viewed in the same way as ‘Ein Heldenleben’’ though here the composer is not a hero, but a bard.

Petrenko’s The Music Makers makes a compelling case for a work often dismissed as navel-gazing, second-rate Elgar…The Liverpool choir is excellent throughout…Rudge sings the solo part with ripe-toned plenitude, and also delivers a richly nuanced account of Sea Pictures, avoiding any hint of Victorian unctuousness. Petrenko’s accompaniments are both flowingly purposeful and attentive to Rudge’s phrasing, with characterful playing from the orchestra.

I feel enthusiastic about this release, and the Royal Liverpool Philharmonic along with its excellent chorus deserve a good portion of the praise. Onyx’s recorded sound places the soloist far forward but is otherwise very well balanced between orchestra and chorus. A must-listen for lovers of this music.

This glowingly idiomatic account of Sea Pictures can only enhance [Rudge's] growing reputation. With her sensitivity to the text, freshness of timbre and secure vocal technique, she once again proves herself a strongly intuitive interpreter of this repertoire...Under Petrenko’s malleable lead the joint RLPO forces give of their fervent, articulate best...No question about it, Petrenko’s abundantly communicative conception demands to be heard.

The reference recordings for these works are by Barbirolli and Boult, both with Janet Baker as soloist. Rudge’s youthful sincerity, clear diction and firm contralto notes make light of the challenge.