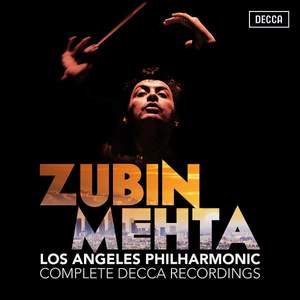 • Zubin Mehta’s tenure of over 16 years as the musical director of the ‘LA Phil’ marks an important chapter in the orchestra’s history. The recorded portrait of the musical partnership between the first American orchestra to be exclusively contracted by a British recording company and the dynamic maestro is explored here in this new edition

• Landmark recordings of Mahler’s and Saint-Saëns’s Third Symphonies, Ravel orchestral works, tone poems by Richard Strauss and the Decca demonstration disc (for its time and today) of music from Star Wars and Close Encounters of the Third Kind.