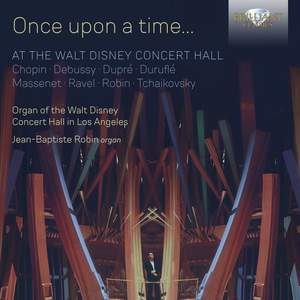 Once upon a time…At the Walt Disney Concert Hall

Robin, J B: The Hands of Time

• At its official opening in October 2003, Walt Disney Concert Hall (a generous gift from the widow of Walt Disney) was hailed as an acoustical triumph. A year later the organ was inaugurated, built by Manuel Rosales. With its curved wooden pipes shooting out like an explosion of Roman candle fireworks the instrument is a masterpiece of design and its stunning musical possibilities made it one of the most remarkable organs in the world.

• The program played by Jean-Baptiste Robin is perfectly suited to the huge potential of the instrument: the selection of musical fairy tales (Ravel, Massenet, Debussy, Duruflé, Tchaikovsky, Chopin and Robin) brings out a myriad of colours, timbres and sonorities of a truly symphonic scope.

• French organist Jean-Baptiste Robin is one of the foremost organists of today. His recordings on Brilliant Classics include works by Alain and a recording of the American Symphonic Organ built by E.M. Skinner in the Cincinnati Museum Center at Union Terminal.

• The booklet contains excellent liner notes on the music as well as a description and specifications of the organ.