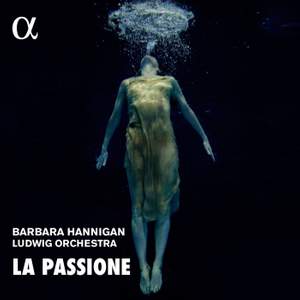 The starting point for Barbara Hannigan’s third recording for Alpha is a work by Gérard Grisey (1946-98) that is particularly close to her heart. Grisey wrote: ‘I conceived the Quatre Chants pour franchir le seuil [Four songs for crossing the threshold] as a musical meditation on death in four parts: the death of the angel, the death of civilisation, the death of the voice and the death of humanity... The texts chosen belong to four civilisations (Christian, Egyptian, Greek, Mesopotamian) and have in common a fragmentary discourse on the inevitability of death.’ Luigi Nono (1924-90) was a politically engaged composer. His stunning monody Djamila Boupacha, a heart-rending cry for solo soprano, pays tribute to a freedom fighter tortured by French paratroopers during the Algerian war; Picasso also portrayed her in charcoal. Once again Barbara Hannigan both sings and directs this pair of twentieth-century works with her friends of the Ludwig Orchestra. She has chosen to couple them with a Classical symphony by the master of the genre, Joseph Haydn, which also deals with the theme of the Passion. Her interpretation is extremely intense and highly personal.

While this unusual “triptych” was artistically risky, I am glad that Hannigan took the risk. Individually, each of these performances is in a class of its own, and the friction that is generated amongst them launches this program to an ever higher level. Not easy listening, then, but this is practically mandatory listening for anyone who cares about modern classical music.

The Haydn may look like the odd man out, but in fact the segue from Nono’s hypnotic monologue for solo soprano feels strangely organic, and the performance of the symphony is shot through with the same febrile energy that Hannigan brings to the outer works. The highlight, though, is the haunting Grisey cycle, which received its premiere under the baton of Sir George Benjamin and inhabits a similar orchestral soundscape to his subsequent operas.

Hannigan’s performance of the Grisey (which she conducts as well as sings) is cooler, perhaps less immediate than the other version available on disc, with Catherine Dubosc and Klangforum Wien, but it evokes the work’s haunting, unclassifiably expressive world more vividly than ever...But in what is otherwise a conventional modern instrument Haydn performance, the effect of the anarchic harpsichord is distracting; in the end it’s the account of Grisey’s masterpiece that provides the enduring experience here.

it is hard not to be intrigued by Hannigan’s precise and committed singing as she weaves through Grisey’s microtonal maze with typical confidence. The title track of the album sees her conducting, leading Haydn’s gorgeous Symphony No 49 with great style, the four movements elegantly contrasted in their moods, the strong lines particularly gracious, the little Trio in the fourth movement lurching disquietingly from the prevalent F minor into F major.