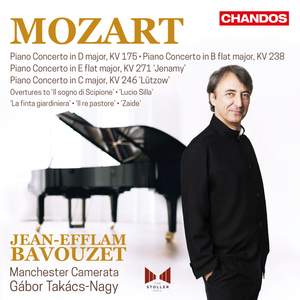 Bavouzet’s performances are given with ‘beaded bubbles winking at the brim’ – Keats’ wonderfully apt metaphor – and he is ideally partnered by Takács-Nagy. The concertos are complemented by five... — International Piano, May 2020 More…

Jean-Efflam Bavouzet’s acclaimed series of piano concertos by Mozart reaches its fifth instalment. Concertos Nos 5, 6, 8, and 9 are complemented by the overtures to Il sogno di Scipione, Lucio Silla, La finta giardiniera, Il re pastore, and Zaide. That all of these works were composed by Mozart between the ages of fifteen and twenty-five serves as a vivid reminder of his unique talents as a child prodigy: these are not childhood efforts but mature works. The Fifth Concerto was actually Mozart’s first, as Nos 1 – 4 are arrangements of works by other composers. As in the previous volumes, Bavouzet is partnered by Manchester Camerata and Gábor Takács-Nagy, all recorded in The Stoller Hall in Manchester.

Bavouzet’s performances are given with ‘beaded bubbles winking at the brim’ – Keats’ wonderfully apt metaphor – and he is ideally partnered by Takács-Nagy. The concertos are complemented by five overtures, again showing that conductor and orchestra were born for Mozart. Chandos’ sound and presentation are superb.

These are discs to treasure, and play often.

Bavouzet’s crisp, fortepiano-like articulation and the brilliance of the Camerata in the five overtures make these discs captivatingly fresh.