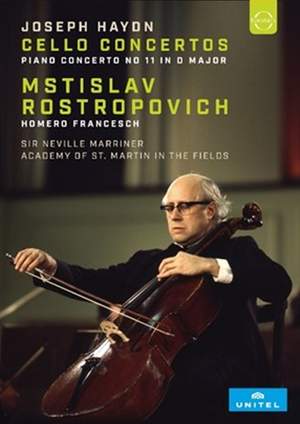 Mstislav Rostropovich was internationally acclaimed and acknowledged as one of the world’s greatest cellists. He has given countless memorable performances and is noted for his commanding technique and intense, visionary playing. Haydn’s Cello Concertos are the most significant works for the instrument from the Classical period. They are enchanting works, and in this legendary recording from Henry Wood Hall, London in 1975, Rostropovich not only plays the cello but also conducts the Academy of St Martin in the Fields. The Haydn programme is complemented by Haydn’s most famous Piano Concerto with Sir Neville Marriner conducting the Academy of St Martin in the Fields and Homero Francesch on the piano.

Rostropovich is able to indulge himself with ardently romantic lyricism and fantastically brilliant playing. Haydn would surely have been amazed.” - Gramophone