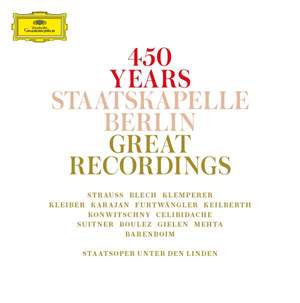 As the Staatskapelle Berlin celebrates its 450th anniversary, Deutsche Grammophon presents 15 discs of sound recordings of outstanding artistic merit from the venerable, world-class orchestra under its great conductors

Presenting an abundance of new, state-of-the-art remasterings (apart from discs 13 & 14) reflecting the orchestra’s Viennese Classical repertory, the symphonies of high and late Romanticism from Schubert to Brahms, Bruckner and Mahler, with the dawn of modernism represented by works by Richard Strauss, Reger and Schoenberg as well as by Paul Dessau, while the Staatskapelle’s operatic repertoire is represented largely by Wagner

Each CD is devoted to a single conductor who has left their mark on the Staatskapelle’s playing.

music director; an essay examining the century of recordings represented in this set and a comprehensive timeline chronicling the orchestra’s 450-year history, by Detlef Giese, principal dramaturge at the State Opera Unter den Linden