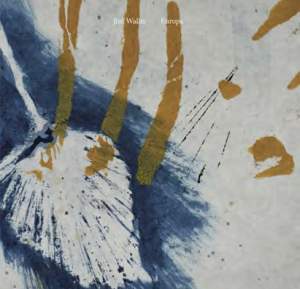 A newcomer to the post-classical and ambient worlds, yet fully formed as he arrives, Jim Wallis is no stranger to embracing musical crossover. A drummer in critically lauded indie bands Modern Nature (members of Ultimate Painting / Beak>) and Still Corners, Wallis is also a superb ambient artist in his own right, releasing his debut album on Tip Top Recordings.

The album accompanies forthcoming independent movie ‘Europa’. ‘Europa “Based on a True Story”, will be premiering in the main competition at the International Documentary Film Festival of Amsterdam this month, and documents the story of an asylum seeker who takes his own life. Wallis learnt to play the cello especially for the album, something that was a somewhat cathartic experience for the talented multi-instrumentalist: “Since my grandma passed away in 2012, her beautiful old cello had been sat untouched in my parents’ house, so I dusted it off and started taking lessons. It was a strange, sometimes moving experience to spend time playing the instrument my grandmother had played for 80 years from when she was a teenager, and particularly to do so while working on this project where living and dead characters interact” said Wallis. ‘Europa’ a film by Rwandan director Kivu Ruhorahoza, is about Simon, an asylum seeker who has recently killed himself, who returns to commune with important people from his life., He is suspended in limbo, which became a central idea

to Wallis when writing the score. “I was quickly drawn to sounds and textures that try to create the feeling of being suspended...bowed strings, long synth drones, atmospheric guitar sounds.”

Inspired in part by the work of Robert Fripp and Brian Eno, lead single ‘Audition’ is a perfect example of how Wallis creates the atmosphere of suspension - a moving synth ballad, iridescent with gentle chimes, the piece is a beautiful kaleidoscope of peaceful sounds. The stirring piece accompanies a scene in which the lead character, Simon, reintroduces himself to an important figure from his past. Album opener ‘Return Train’ weaves piano with humming cellos. “Out of necessity, the arrangements I wrote for the cello had to be simple” said Wallis, explaining his employment of the instrument after having found the cello at his Grandmother’s, “but that seemed to fit the mood and soon I was able layer up drones on ‘Return Train’, and play simple melodies like the ones in ‘Open Door’.”

Elsewhere on the stunning album, ‘Europa III’ experiments with sparse strings and a haunting melodic theme that lingers long after listening. The final development of one of the film’s main musical themes, it plays as the main characters each make a tension-filled journey across London to meet ahead of the film’s denouement. The piece features Cathy Lucas of Vanishing Twin on the violin. “I made several sounds using an ebow, an electronic device which creates a continuous vibration in stringed instruments, creating a droning feedback loop. I was also drawn to the ‘suspended cymbal’ (which is what orchestras call the cymbals typically seen on a drum kit, usually played with soft mallets, to differentiate them from pairs of clash cymbals) and used these on the pieces ‘Open Door’, ‘London Walk’, and ‘Europa III’ to create a slightly unsettled, ethereal atmosphere” he says. The classically trained musician takes influence from ambient artists such as A Winged Victory for the Sullen, whom he shared a stage with at Botanique in Brussels,, William Basinski, Tim Hecker, Bing & Ruth and Stars of the Lid.