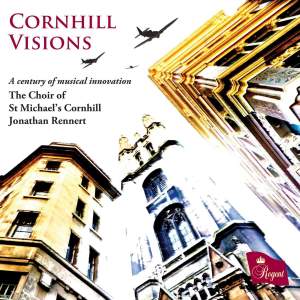 Darke: The eyes of all

Darke: Even such is time

Darke: Be strong and of a good courage

Vaughan Williams: A vision of aeroplanes

This recording celebrates one hundred years of musical innovation at St Michael’s, the historic church on Cornhill, near the Mansion House, the Bank of England, and the Royal Exchange. Built above the foundations of the Basilica of Roman Londinium, and boasting a magical acoustic, St Michael’s has attracted composers, singers and organists for well over six hundred years.

The past one hundred years have seen just three Directors of Music: Harold Darke, appointed in 1916; Richard Popplewell who succeeded him in 1966; and Jonathan Rennert, appointed in 1979, and celebrating 40 years at St Michael’s in 2019. During that period many composers have written music for the Choir of St Michael’s, and its sister group, St Michael’s Singers, including Ralph Vaughan Williams, Herbert Howells, Sir William Harris, Sir George Dyson, William Mathias, Kenneth Leighton,

Michael Berkeley, Ruth Byrchmore, and Sir Stephen Cleobury – creating an enviable legacy of ground-breaking, and often visionary, works. Today, a younger generation of composers is being nurtured, through such initiatives as the appointment of a Composer in Residence .

The programme is built around four seminal works of the twentieth-century English choral tradition: Vaughan Williams’s post-war hymn of thanksgiving Lord, The hast been our refuge;

his apocalyptic and technically-demanding A Vision of Aeroplanes; and Valiant-for-Truth – a setting of mystical religious words by John Bunyan, here given an emotionallypowerful quiet ending, as suggested by Vaughan Williams himself, and differing from both the published score and all other recordings. Arnold Bax’s virtuoso and quirky setting of the Magnificat forms the centrepiece of the programme.Around these pillars are first recordings of a selection of works by Harold Darke, two recent compositions by the current young Composer in Residence, Rhiannon Randle, and new works from Gareth Treseder, Philip Moore, and Director of Music, Jonathan Rennert.