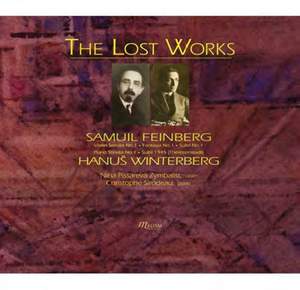 It is not overstating the case to hail this as a major and significant rediscovery of lost masterpieces. The Feinberg sonata is a real find. It hails from the 1910s, the period (up to the early 1930s) of the composer’s turbulent, intense and tragic style which encompasses the first six piano sonatas and is epitomised by the powerful 1st Piano Concerto.

The case of Hans Winterberg is exceedingly complex and only now being unravelled, and the breadth and quality of his uvre appreciated. A Czech-German Jew, his personal and artistic fate in the years surrounding World War II were dangerous and complicated, as were the family and legal entanglements after the war, which culminated in a disgraceful contract with the custodians of his archive that effectively embargoed his music entirely, until 2031!

It is only very recently, thanks to the efforts of Michael Haas (forbiddenmusic. org), Peter Kreitmeir (the composer’s grandson) and so far, a very few performers, primarily Sirodeau, that we are able to hear Winterberg’s tough, ruggedly individualistic music. The works are performed by Nina Pissareva Zymbalist (violin), Christophe Sirodeau (piano).