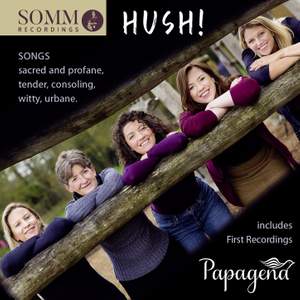 Each of the five very strong female voices in this accomplished professional consort is full of character, yet they blend perfectly when required in a sequence of immaculate performances of repertoire... — Choir & Organ, May 2020, 5 out of 5 stars More…

No. 1, Moonset (Version for Treble Chorus)

The Snow It Melts the Soonest (Arr. W. Brückner)

David talks to members of the all-female vocal quintet about their new recording on Somm Recordings.

SOMM Recordings is delighted to announce Hush!, the second release by the extraordinary voices (BBC Radio 3) of female quintet Papagena following their internationally acclaimed, Amazon classical chart-topping debut, The Darkest Midnight (SOMMCD 0189). Hush! unearths a treasure trove of songs largely neglected on disc to deliver a stunning follow-up to The Darkest Midnight. Where it hymned the cold, harsh glamour of sun-starved winter, Hush! playful, poignant, poetic and primed with the expectation of joy celebrates the warmth and light of love. Typically for Papagena, Hush! is a centuries-spanning, genre-defying, culturally diverse recital marrying sacred and secular, ancient and modern, classical, traditional and even stadium rock. The result is an often gorgeous, always intelligent exploration of hush as a harbinger of consolation, of tranquil release and of mild admonition to pause, listen, feel and relish the quietly exultant glories of being alert and alive to the fleeting moment. Papagenas beautifully blended, pristine vocal signature illuminates ecstatic heights, anguished depths and love in all its multi-hued splendour with a becoming thread of wit and humour.

Each of the five very strong female voices in this accomplished professional consort is full of character, yet they blend perfectly when required in a sequence of immaculate performances of repertoire from a very wide range of cultures and traditions...Papagena brings a bright, focused sound, bell-like tuning and carefully sculpted phrasing to every piece. Highly recommended.

The group’s versatility and flexibility amazes, their ability to inhabit diverse styles remarkable. The vocal blend is never too homogenous and smooth. It’s unfair to single any member out, though altos Suzie Purkiss and Sarah Tenant-Flowers add a thrilling weight to Papagena’s sound