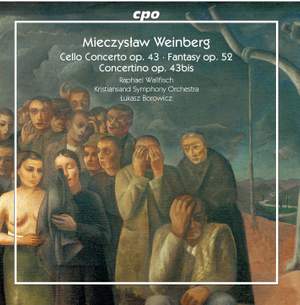 Wallfisch’s performance, support by the excellent Norwegian Orchestra under Łukasz Borowicz, is eloquent and impassioned, contrasting lyrical beauty of tone in the reflective sections of the... — BBC Music Magazine, April 2020, 4 out of 5 stars More…

Mieczyslaw Weinberg grew up in Warsaw, a city in which Poles then accounted for two thirds of the populace and Jews for one third of its residents. The Jews increasingly regarded themselves as Poles, just as he did. The three works on this CD clearly attest to the fact that Weinberg felt that he belonged to both traditions. The Concertino and the Cello Concerto have Jewish roots, while the Fantasy is a piece with a typically Polish character. If the Concertino, in which the orchestra is extraordinarily sparingly used and the violoncello practically plays a solo, may be described as the composers »lyrical journal« in music notes, then the Cello Concerto derived from it has even more clearly been written for the grand stage. It is more fully developed, the work has assumed a new character, and the orchestra plays a more important role in it.

Wallfisch’s performance, support by the excellent Norwegian Orchestra under Łukasz Borowicz, is eloquent and impassioned, contrasting lyrical beauty of tone in the reflective sections of the work with brilliantly incisive fingerwork in the more virtuosic faster movements…Wallfisch’s trump card is that his release places the concerto in the context of Weinberg’s other music for cello and orchestra.

A fine programme and a Cello Concerto that everyone should hear.