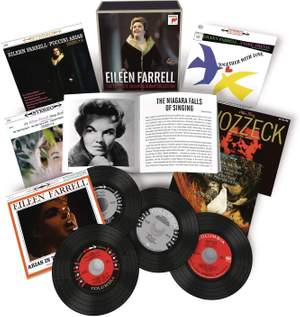 It’s a superbly burnished and powerful instrument: firm in the lower registers; steely but beautiful at the top, with a terrific sheen...This box is invaluable for anyone wanting to hear one... — Gramophone Magazine, May 2020 More…

Puccini: In questa reggia (from Turandot)

Arlen: Blues in the Night

Kern: I'm old-fashioned (from You Were Never Lovelier)

Gershwin: Looking For A Boy

Rodgers, R: Glad To Be Unhappy

McHugh: On the sunny side of the street

Rodgers, R: He was too good to me

Arlen: I Gotta Right To Sing The Blues

Moore, T: Believe me if all those endearing young charms

Moore, T: The groves of Blarney - "'Tis the last rose of summer"

Barnard, C: Come back to Erin

Vaughan Williams: Snow in the Street

Willis, R S: It came upon the midnight clear (Carol)

trad.: Joy to the World!

trad.: Song Of The Crib

Handel: Messiah: There were shepherds abiding in the field

Handel: Messiah: And the Angel said unto Them

Handel: Messiah: And Suddenly there was with the Angel

Handel: Messiah: Then shall the eyes of the blind

Handel: He shall feed His flock (from Messiah)

Howard, B: Fly Me to the Moon

Barris: Wrap Your Troubles in Dreams

Howard, B: To Be In Love

Heusen: The Second Time Around

Rodgers, R: Hello young lovers (from The King and I)

Porter, C: In the Still of the Night

Mercer, Johnny: Out of This World

Arlen: I never has seen snow

Rodgers, R: Where Or When

Wilder, A: The April Age

Styne: The Party's Over

Previn: The Faraway Part Of Town

Previn: But Not For Me

Wilder, A: Everywhere I Look

Mercer, Johnny: I Wonder What Became Of Me

Schwartz, Arthur: By Myself

Duke, V: Cabin in the Sky

Previn: Where, I wonder

Arlen: The Morning After

Howard, B: Be My All

Previn: Love Is Here To Stay

In celebration of the Eileen Farrell’s 100th anniversary, Sony Classical is pleased to release a new x16 CD collection of this beloved artist’s entire American Columbia discography. This stunning collection displays Farrell’s uniquely wide repertoire, ranging from Brünnhilde to Broadway, from Cherubini’s Medea to Berg’s Marie, from Debussy songs to “Danny Boy”, from Gluck to Gershwin. Born in 1920 in Connecticut to vaudeville performers who styled themselves “The Singing O’Farrells”, she studied with a Met contralto and by the age of 20 had moved to New York with her own CBS radio programme, “Eileen Farrell Sings”. The radio programme lasted seven years and made her a household name. Works performed by Farrell on the show appear on this must-have box set. In 1958, she essayed Cherubini’s Medea – one of her favourite roles – and recorded extended excerpts of it for Columbia in New York. High Fidelity compared Farrell’s interpretation favourably to Callas', praising her “voice of almost flawless beauty, and she is a musician of great intelligence.” Gramophone concurred: “The disc should be heard by all lovers of fine singing.” Farrell’s Met debut – as Gluck’s Alceste, also included in this collection – came in 1960. Also included in this box set are works by Verdi, Schubert, Puccini, Beethoven and Debussy.

It’s a superbly burnished and powerful instrument: firm in the lower registers; steely but beautiful at the top, with a terrific sheen...This box is invaluable for anyone wanting to hear one of the great voices of a generation and sample one of the great opera careers that never quite was.

Farrell was a gloriously versatile singer, and these 16 discs range from Handel to Harold Arlen...while among the historical curiosities is an extraordinary performance of Vaughan Williams’s Serenade to Music, conducted by Bernstein at the opening of Lincoln Centre, New York, in 1962. It’s a real box of vocal treasures.