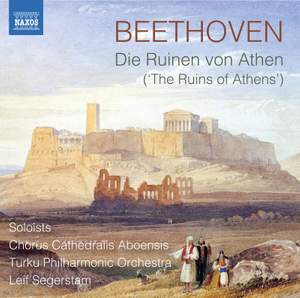 Beethoven: The Ruins of Athens

Beethoven: Incidental music to The Ruins of Athens

Beethoven: Incidental music to The Ruins of Athens

No. 6a, Mit reger Freude

No. 7b, Will unser Genius noch einen Wunsch gewähren?

Die Ruinen von Athen (‘The Ruins of Athens’) was composed to celebrate the opening of the new German theatre in Pest in 1812. Designed to accompany the play of that name by August von Kotzebue, its incidental music is substantial enough to form a kind of one-act Singspiel. It is full of attractive arias, duets and choruses and includes the famous Turkish March. Though the work’s theme was rooted in Greek mythology, in reality it was explicitly political in nature, celebrating Pest as ‘the new Athens’. This is the first ever recording of the work with full narration.