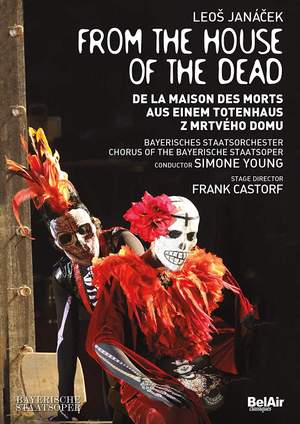 Janáček: From The House of The Dead

This production’s somewhat extreme view of humanity leaves rather little redemption on show…The humanity is in the music, of course, and especially here in Simone Young’s interpretation, softer-edged... — BBC Music Magazine, June 2020, 3 out of 5 stars (Performance) / 4 out of 5 stars (Picture and Sound) More…

Death is never far away in Leo Janáček's work : in The Cunning Little Vixen, the main character falls under the fire of a hunter, Katia Kabanova kills herself, Emilia Marty in The Makropulos Case has to deal with the hard consequences of eternal youth. From the House of the Dead makes no exception, especially since the composer knew he was living out his final days when he decided to adapt into an opera Fyodor Dostoyevsky's eponymous novel, a literary work inspired by the time the novelist spent in a Siberian prison. This painful feeling of ineluctability pervades through his disillusioned and savage score, that recounts the hopeless life of the convicts of a Soviet concentration camp. In this place where life has already drawn out, in this no mans land forsaken by civilization, Janáček portrays the anonymous and daily sufferings, the abuses, the corporal punishments, but also evokes fragments from the prisoners' past, bringing them back to life for the duration of a game or of a story.

This production’s somewhat extreme view of humanity leaves rather little redemption on show…The humanity is in the music, of course, and especially here in Simone Young’s interpretation, softer-edged than some but lacking nothing in theatrical flow. Standing out from an excellent cast are Bo Skovhus’s powerful Šiškov, his body and face covered in sores, and Peter Rose’s compassionate Gorjančikov.

The cast is large and too numerous to acknowledge everyone, and there are no weak links. Bo Skovhus scores another career highlight as Šiškov and makes almost a mini-opera of his long scene. Peter Rose is an even-toned and digniﬁed Gorjančikov, though is Castorf suggesting a less than avuncular interest in Aljeja? Simone Young’s conducting is controlled and sleek, perhaps at times it could be more abrasive, but it is a ﬁne reading and one that suits Carstorf’s sophisticated take on the opera.