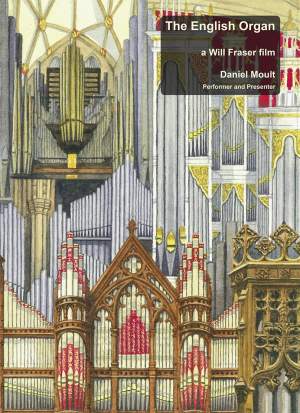 The English Organ, filmed over more than a year in forty locations in three continents and released for Christmas 2019, is the definitive documentary about the story of the English organ and its music over five hundred years. Daniel Moult presents three feature length documentaries, as well as performing more than ten hours of repertoire from Byrd to the present on thirty-three organs. This luxurious boxed set is the magnum opus of Fugue State Films, and will appeal to anyone with an interest in music, the organ or English history.

4xDVD, 3xCD boxed set. Three feature length documentaries form the centrepiece of this luxuriant boxed set which traces the history and development of the organ and its music in England from c1550 to the present, showing the vibrant culture of the organ and its music, and how this mirrors the broader narrative of English history. The DVDs also include filmed performances of eight hours of music from Byrd to the present day, played on thirty-three iconic organs by Daniel Moult. Each organ has a filmed demonstration or portrait. This amounts to a magnificent portrait of an instrument and a culture.

A superb selection of the best instruments from the period

This film showcases a superb selection of the best instruments from a 500 year period. Thirty-three organs from the UK, the USA, Australia and New Zealand include:

Chapel of the Palace of Westminster – Drake

We have filmed in Australia and New Zealand on the following instruments:

Performances will be filmed at all these locations: