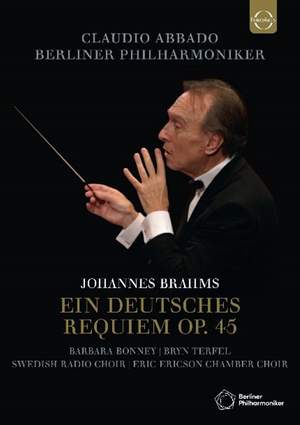 Ein deutsches Requiem was Brahms’ first work to bring together a mixed choir, soloists and a large-scale orchestra. Ein Deutsches Requiem differs from all previous works of this genre in both form and content. He created the requiem more like a sermon than a mass for the dead. It puts words of consolation at the start and end: the blessing of the suffering and the blessing of the dead. This is an extraordinary performance of Ein Deutsches Requiem by the Berliner Philharmoniker under the baton of Claudio Abbado, recorded in the Grand Hall of the Musikverein in Vienna in 1997 to mark the centenary of Johannes Brahms’ death. Featuring soprano Barbara Bonney and baritone Bryn Terfel with the acclaimed Swedish Radio Choir and the Eric Ericson Chamber Choir. Lovingly restored, up-scaled and digitally remastered. Including intensive and high-quality audio and visual restoration