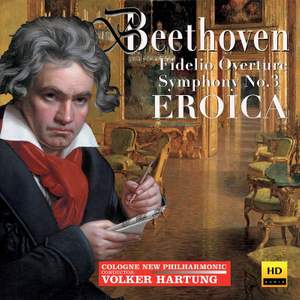 "The French Revolution inspired Ludwig van Beethoven to write the greatest of all symphonies in 1804, which he titled ""Bonaparte."" One day he had to read that his political ideal, the French consul, had crowned himself emperor. - Immediately, when he got home, Beethoven tore the title page off his symphony, and made another one for it, which bore the inscription: ""Sinfonia Eroica.""

The fact that Beethoven, despite his disappointment over the coronation of Napoleon as Emperor, left his symphony musically intact, is most plausibly interpreted by the fact that he still clung to Napoleon's ideals of the Revolution. The ideals of ""Freedom, Equality, Brotherhood"" he saw equally applying for Germany. But finally, he wanted to see it realized in the fight against Napoleon.

In Memory of Beethoven's 250th birthday, the Cologne New Philharmonic, conducted by Volker Hartung, is presenting a new HD-audio recording of his most important work, combined with a brilliant reading of the overture to the opera ""Fidelio."""