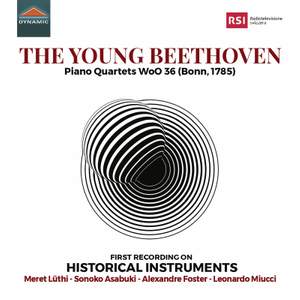 At the age of 13 Beethoven was already hailed as the new Mozart and many of his early works, especially in the chamber music genre, were influenced by Mozart’s model, like the Three Quartets for Piano and Strings WoO 36, composed in 1785 and published posthumously in November 1828. These three chamber works are directly modeled on three of the six violin sonatas that Mozart published in 1781: KV 296, 379 and 380. One of young Beethoven’s patrons was Johann Gottfried Mastiaux , whose children played violin, viola, cello and the piano. Although there is no concrete evidence for it, Beethoven’s association with the Mastiaux family could have inspired him to write for such an instrumental ensemble; it is unlikely that Beethoven was yet aware of the first example of this genre, Mozart’s Piano Quartet in G minor, KV 478, which was finished only on 16 October 1785 in Vienna, thus not in time for Beethoven to have become acquainted with it in Bonn. Therefore, it is possible that WoO 36 – and not KV 478 – was in fact the first example of the piano quartet in chamber music literature. Despite these circumstances and the composer’s youth, the WoO 36 piano quartets represent an important artistic pinnacle in which the seeds of Beethoven’s genius that would proliferate during his maturity were already evident. This album features the first recording on historical instruments of the Piano Quartets WoO 36 (Bonn, 1785) played by Leonardo Miucci (historical piano), Meret Lüthi, , Sonoko Asabuki, and Alexandre Foster, .