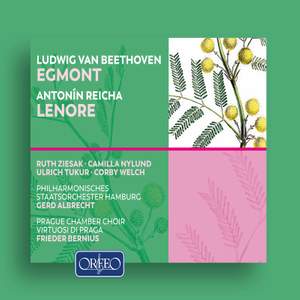 Whereas Ludwig van Beethoven’s only opera Fidelio will remain at home timelessly on all the major stages, of the other stage music by the great composer concert audiences are usually only aware of the relevant overtures. However, the eminently appealing music to Egmont with its beautiful and catchy songs and its energetic and melodious orchestral scores might be considered Beethoven’s most interesting and worthwhile stage music after Fidelio.

Reichas dramatic cantata Lenore is the musical setting of the eponymous horror ballad by the German poet Gottfried August Bürger, famous today above all as the author of the tales concerning the Baron of the Lies, Münchhausen. In comparison with Beethoven (who is said greatly to have admired Reicha’s Lenore and even to have recommended it be performed), in musical terms Reicha’s cantata does not point into the future despite all its onomatopoetic effects, but takes its bearings audibly from the epic oratorio style of Reicha’s mentor and friend, Joseph Haydn