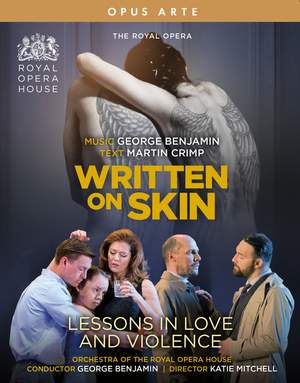 George Benjamin: Written on Skin & Lessons in Love and Violence

Written on Skin has been hailed as ‘magic and irresistible … the best opera written over the last twenty years’ (Le Monde). It tells the story of a cruel and powerful Protector who asks a mysterious Boy to create an illuminated book to celebrate his wealth and family. He invites the Boy into his home, little realizing that this will lead to a journey of startling, joyful and ultimately tragic self-discovery for his oppressed and much younger wife Agnès.

Drawing on the real-life relationship between Edward II and Piers Gaveston, Lessons in Love and Violence explores how personal relationships can have fatal political consequences. The King lives in a close but uneasy relationship with his wife Isabel, their two children and his lover Gaveston. When the King banishes his military advisor Mortimer, he sets off a chain of devastating events.

The composer conducts two superb international casts, including soprano Barbara Hannigan, who appears in the leading roles of Agnès and Isabel.