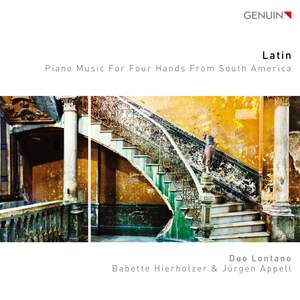 From Gardel in Argentina to Gottschalk in the Caribbean, there’s plenty of colour and variety in this traversal of Latin America. A shame it’s all a little primly played. — BBC Music Magazine, April 2020, 3 out of 5 stars More…

Latin American music is rarely heard in classical music. And wrongly so, as Duo Lontano prove on their new GENUIN CD. Babette Hierholzer and Jürgen Appell present arrangements for piano four hands, introducing us to the world of tangos, waltzes, and capriccios of the diverse continent. Among them are compositions by Louis Moreau Gottschalk, whom Chopin once predicted to become the 'king of pianists.' This is indeed the case, at least in Latin America, where he laid the groundwork and inspired many other wonderful works by Teresa Carreño and José White Lafitte. Duo Lontano also interpret 'Latin' tango classics by Carlos Gardel and Astor Piazzolla as well as well-known melodies such as 'Bésame mucho' or 'Malagueña' with plenty of temperament and elegance.

From Gardel in Argentina to Gottschalk in the Caribbean, there’s plenty of colour and variety in this traversal of Latin America. A shame it’s all a little primly played.

These mood changes and rich fare are all captured well by this accomplished duo and that, coupled with the idiomatic arrangements, makes for an entertaining programme… All in all, an engaging release.