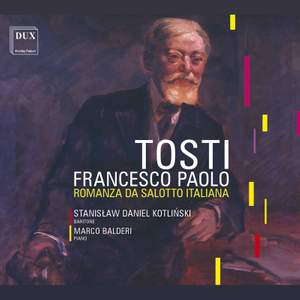 Bass baritone Stanislaw Daniel Kotlinski together with pianist Marco Balderi presents an album of both the most popular and less known compositions of Sir Francesco Paolo Tosti.

Sir Francesco Paolo Tosti (1846-1916) was considered one of the most brilliant artists of his era, the late 19th and early 20th centuries, in many European countries. The popularity and respect Tosti enjoyed not only in the musical community can be demonstrated by the fact that in 1909 he was honoured with the title of the Commander of the Royal Victorian Order along with the right to use the title “sir” before his name. He was the third artist in the history of music to receive this honour. Nowadays, Tosti’s works are enjoying a well-deserved revival.