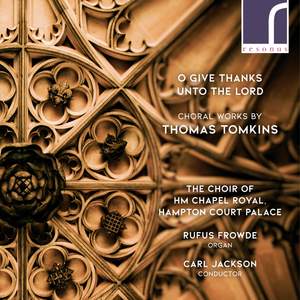 O Give Thanks Unto the Lord: Choral Works by Thomas Tomkins

This collection offers a vivid survey of the musical tastes of the court of Charles I, sung with refreshing fervour. — The Observer, 12th January 2020

Tomkins: Death is Swallowed Up in Victory

I. Magnificat (The Fourth Service)

Tomkins: Who Can Tell How Oft He Offendeth

Tomkins: Give sentence with me, O God

I. Magnificat (The Seventh Service)

Tomkins: Jesus Came When The Doors Were Shut

Tomkins: Turn unto the Lord our God

Tomkins: Give ear to my words

Tomkins: The Heavens Declare The Glory of God

Tomkins: O Lord, How Manifold Are Thy Works

Tomkins: O Give Thanks Unto The Lord

Following their debut album for Resonus Classics, The Choir of HM Chapel Royal, Hampton Court Palace, with their director Carl Jackson, returns with an album of choral works by the late-Tudor composer Thomas Tomkins (1572–1656). Featuring elaborate verse anthems, two settings of the Evensong canticles, and four-part psalm settings, this album reminds us of Tomkins’s prominence as one of the greatest Chapel Royal composers of the late-English Renaissance.

This collection offers a vivid survey of the musical tastes of the court of Charles I, sung with refreshing fervour.