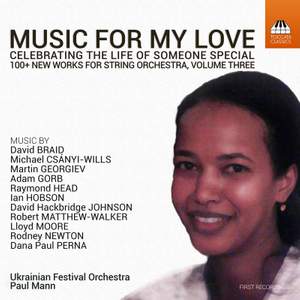 Offer, Music for My Love: Celebrating the Life of Someone Special Vol. 3

Braid: Out of the Darkness

When Yodit Tekle was diagnosed with stomach cancer in late 2014, her partner, Martin Anderson, who runs Toccata Classics, asked a few composer friends to write some music for strings to bring her comfort in her illness. As her life slipped away, he had the idea that she might be remembered in music and so he began to commission other pieces for string orchestra in her memory. To his surprise, almost everyone he asked generously agreed, and so the project snowballed: there are now over 100 composers who have now written or agreed to write for it in an undertaking that is probably unique in the history of music. This third volume presents eleven more pieces in an initiative which, in effect, transforms love into something you can hear. Under the guidance of Paul Mann, who is co-ordinating this project as well as conducting it, the young players of the Ukrainian Festival really took this music to their hearts and produced performances of real intensity. Another point of interest: Yodit was from Eritrea, and so in these days when the classical world is worried that it might be appealing largely to a white, middle-class elderly male audience, here is a sequence of new classical works composed for a young black woman from north-east Africa.

Vol 3 of Toccata Classics’ enormously impressive, moving commemorative project (honouring Yodit Tekle, pictured on the cover; for the background, see 1/17, 3/19) brings together another 11 works, from composers on either side of the Atlantic...The range of mood, too, is remarkably wide, encompassing the elegiac to the celebratory...Paul Mann again produces wonderfully sensitive playing from the excellent Ukrainian Festival Orchestra. The sound, once again, is terrifically clear and warm. I cannot recommend this more highly.

The performances of all these works are quite superb. The Ukrainian Festival Orchestra plays with a most attractive richness of tone, and the players’ mastery of and commitment to music that was inevitably unfamiliar to them, is outstanding. Much of the credit for this must go to Paul Mann, a conductor whose curiosity for new music seems to know no bounds. The recording, by a Ukrainian team, is very fine.