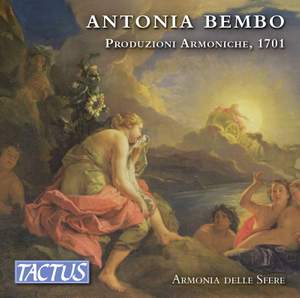 Within this new album the Armonia delle Sfere ensemble is delivering to us the complete Produzioni Armoniche by Antonia Bembo, a collection of fourty one motets dedicated in 1701 to Louis XIV, the Roi Soleil, to whose court she landed after a series of vicissitudes occurred in Venice, her hometown, including the failure of a marriage and important family disputes, for which she was deprived of his paternal inheritance. After being trained under the musical guidance of Francesco Cavalli (1602-1676), organist of the ducal chapel of San Marco, Antonia secretly married Lorenzo Bembo, a Venetian nobleman, from whom she had two children, and from whom in 1672 she herself asked divorce, due to the continuing absence of her husband, whom she also accused of continuing abuse and betrayal. She then moved to Paris, perhaps following the guitarist Francesco Corbetta, where she concentrated on music and composition, and where she had the opportunity to perform in the presence of Louis XIV, at the court of which she would find acceptance and protection until the end of her life. It is the fascinating story of a strong personality that sought and found a way to oVercome the difficult conditions of a seventeenth century female artist.