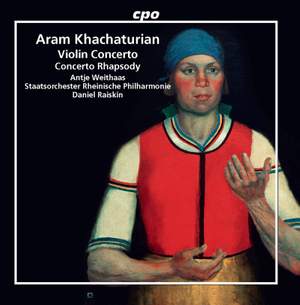 In the 1960s Aram Khachaturian engaged in a number of experiments in which he covered terrain situated at an astonishing distance from the immediately appealing tone of the works that he had composed prior to those years. These experiments included the first of his three concert rhapsodies, in which he completely emancipated himself from the established forms that he had filled out in his concertos for piano, violin, and violoncello, which already then were world famous. While the virtuosic ambitions of the rhapsodies are in no way inferior to the technical demands of their older sister works, he now requires what is perhaps an even higher measure of expressive shared experiencing and solo messaging. The direct juxtaposition of the two concert violin compositions recorded by Antje Weithaas and Daniel Raiskin and the Rhineland-Palatinate State Symphony Orchestra conveys the extraordinarily grand leap into a 'modernism' that hardly anybody would have thought possible for the author of the Sabre Dance. In 1971 Aram Khachaturian was honored for his rhapsodic risk-taking when he received the State Prize of the Soviet Union for his second concert trilogy.