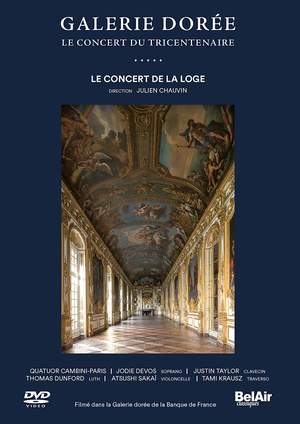 In 2018, the Golden Gallery of the Central Bank of France, and more precisely its renovation in the style of the 18th century by the Count of Toulouse, celebrated its tri-centenary. Like the Hall of Mirrors at the Château de Versailles, it counts among the most lavish ceremonial galleries of France: it was in this glorious setting that several scenes of the movie Marie-Antoinette, by Sofia Coppola, were shot. On this occasion, the baroque ensemble Concert de la Loge and its musical director Julien Chauvin drew upon this incredible setting, its paintings and its sculptures but also its history, and brought together various pieces from the baroque and classical repertoire : Lully, Rameau, Couperin, Boccherini, Charpentier, Vivaldi, Bach, Haydn, Mozart, Handel Thanks to an elaborate scenography and to a smart lighting design, the program is also a journey through the mysteries of the visual works displayed in the gallery: for instance the allegories of the young Louis XIV at the beginning of his reign, the story of Henry IV... all of which is explained at length in a gorgeous booklet written by art specialists.