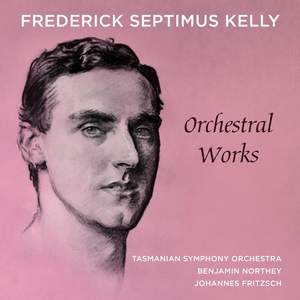 I. It Is Not Dawn Till You Awake

II. Shall I Compare Thee to a Summer's Day

Frederick Septimus Kelly was one of Australia's great cultural losses of World War One: a composer the equal of Vaughan Williams, who survived Gallipoli but was cut down in the final days of the Battle of the Somme. His music  crafted entirely in his head, and only committed to paper once perfected  displays touching lyricism and profound invention. This album presents his complete catalogue of orchestral works, many recorded here for the first time and includes six world premiere recordings. Born in Sydney, 'Sep' Kelly's precocious musical talent quickly moved beyond his local piano teachers, and he was sent to boarding school in England at Eton. There he also began a career in rowing  a sport in which he would win gold at the 1908 Olympic Games. He wrote his first symphony (which he modestly titled a Suite) in his mid 20s; it displays an astonishing fluency and command of orchestral colour, with hints of Brahms and Mahler and finishing with a magnificently extravagant fugue. Tantalisingly, we know from Kelly's diaries that he composed at least two other symphonies, but never wrote them down. We do, however, have two major orchestral works which highlight the depth of the talent which was lost to us. The first is an exquisite Serenade for flute, harp, horn and strings, written at sea, on a journey home to Australia. The second is his Elegy in memoriam Rupert Brooke. The two had become close friends en route to Gallipoli, but Brooke died of septicaemia before they reached the Dardanelles. The music, composed in a dug-out with bullets whistling overhead, recalls the strange beauty of his funeral, conducted by moonlight on the eve of battle in a Greek island olive grove, the air fragrant with wild sage and thyme. This is the second and final volume of Kelly's works to be released on ABC Classics, following the huge success of A Race Against Time (ABC4814576). * World premiere recordings