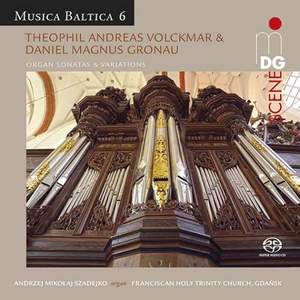 Volckmar was known as a leading virtuoso and as a difficult individual, besotted with his own self- importance. Szadejko’s brilliant playing captures the craziness of the man, though perhaps... — Choir & Organ, February 2020, More…

Thanks to the tireless efforts of the Gdansk composer, organist, and ensemble director Andrzej Szadejko, the lavishly reconstructed organ in Gdansk’s Trinity Church experienced its rededication last year.

This opulent instrument by the Wegschneider Company in Dresden has forty-one stops on three manuals and a double pedal unit and represents the state of development that it had reached around the middle of the eighteenth century. In addition, the meticulous registration of works by Theophil Andreas Volckmar and Daniel Magnus Gronau lends special authenticity to the revival of the Late Baroque Baltic-Hanseatic tonal splendour.

This Super Audio CD is a top-quality three dimensional production offering listeners the opportunity to experience the magnificent acoustics of Gdansk’s mighty Trinity Church as if they too were there. While performing with two hands simultaneously on three manuals and employing the large and small pedals in keeping with historical prescriptions, Szadejko breathtakingly reveals a neglected chapter of music history.

Volckmar was known as a leading virtuoso and as a difficult individual, besotted with his own self- importance. Szadejko’s brilliant playing captures the craziness of the man, though perhaps in slightly too chaotic a manner; the tempi are seriously fast. The organ in the Holy Trinity Church in Gdańsk with its utterly fabulous renaissance case, was once presided over by Volckmar himself; the extent to which the 2018 instrument is reconstructed, or entirely new, is unclear from the booklet. In the cavernous acoustics it sounds very splendid, if not in any way ‘old’. Highly recommended.