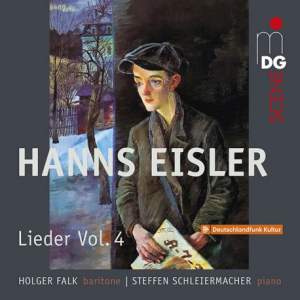 Show 8 remaining works on this recording

Hide 8 works on this recording

Hanns Eisler composed more than five hundred songs, and his very first extant compositions include songs with piano accompaniment. On the fourth and last volume of their selections from Eisler’s songs, Holger Falk and Steffen Schleiermacher focus on his early works and bring to light an absolutely astonishing discovery: the young Hanns was an autodidact who had an incredible feel for the song part, and his artistic aspirations are also evident in the piano part.

Eisler transcends by far the mere imitation of models. Here we encounter free tonal compositions as well as music of revue character, expressive passages as well as laconic ones. His choice of texts is likewise very broad. While Brecht became the focus in Eisler’s later work, here he concentrates on poems by Eichendorff and Büchner and by Trakl and Morgenstern. The songs set to Far Eastern poetry, in translations by Hans Bethge and Klabund, are very much in keeping with their times. Eisler even set newspaper advertisements to music!

Volume 1 was a Gramophone Editor’s Choice and was also a finalist into the Gramophone Awards Vocal Category.