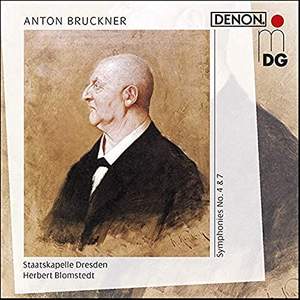 Blomstedt’s Fourth is glorious, one of the best available…combined with a sense of spacious majesty, it unfolds in a continuously engaging manner, from the soft, distant horn calls of the opening... — Fanfare, Jul/Aug 2020 More…

It is with the legendary recording of Bruckner’s Symphonies Nos. 4 and 7 by the Staatskapelle Dresden under its former principal conductor Herbert Blomstedt that we are now launching a cooperative venture guaranteed to create a sensation.

Licensed by Nippon Columbia, MDG will release top-quality recordings from the extensive Denon catalogue. As already the first release demonstrates: more great things are yet to come! To launch the collaboration, this recording presents Bruckner’s Fourth and Seventh symphonies, which surely number among his most popular.

The Staatskapelle Dresden was made in musical heaven for Bruckner’s music.

Richard Wagner called it his “wonder harp,” and Herbert von Karajan characterised the sound of this oldest orchestra in the world as the “brilliant glow of old gold.” All this and much more is found in Herbert Blomstedt’s interpretation of both symphonies from 1981.

Blomstedt’s Fourth is glorious, one of the best available…combined with a sense of spacious majesty, it unfolds in a continuously engaging manner, from the soft, distant horn calls of the opening to the towering climaxes, each carefully prepared so that when it arrives, it seems like a force of nature. Blomstedt pays detailed attention to dynamic contrasts and nuances, the music flows like silk, it soars and expands into space.