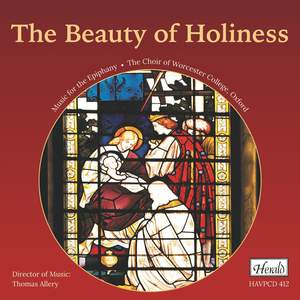 The Beauty of Holiness - Music For the Epiphany

The Choir of Worcester College, Oxford

Johann Heinrich Reinhardt: O Worship the Lord in the Beauty of Holiness

Joseph F Thrupp: Brightest and Best of the Sons of the Morning

Tomkins: O Lord, How Manifold Are Thy Works

William Fitzpatrick: Away in a Manger

Eric Thiman: Brightest and Best of the Sons of the Morning

Monk, W H: As with Gladness Men of Old

This album celebrates the musical heritage of the Christian feast of the Epiphany, the revelation of the infant Christ to the world. Like the feast itself, the music is traditionally centred on the visit of the Magi to Bethlehem and the star that led them to the Holy Family. Beautifully performed by the choir of Worchester College, Oxford and director Thomas Allery, this album is the perfect musical accompaniment to the festive season.

This recording opens with the rousing hymn O worship the Lord in the beauty of holiness, by the prolific hymn-writer the Revd John Samuel Bewley Monsell (d.1875), taking inspiration from Psalm 96 and the gifts of the Magi. It was written in 1863, one year before the re-decoration of Worcester College Chapel. The album then moves through a variety of composers including Thomas Tomkins (d.1656), best known as the organist of Worcester Cathedral, with his anthem for lower voices, O Lord, how manifold are thy works. Works by Buxtehude, Ireland, Handel, Langlais and Pachelbel are also included.

The Choir of Worcester College, which sings four times a week during the University Term, engages in a wide range of musical commitments including concerts, recordings, and touring. The composition of the choir is unique in Oxford, with the choral scholars being joined twice a week by boy choristers from Christ Church Cathedral School. The choir has recently toured to Italy and Germany and, within the UK, to Winchester, Worcester, and Gloucester Cathedrals, and has released several CDs.

The choristers frequently perform repertoire for upper voices alone, and in this formation have performed in Bristol, St Michael at the Northgate in Oxford and in