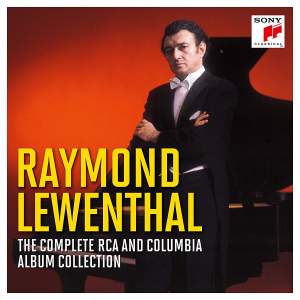 All in all, this collection is a must-have for all pianophiles and lovers of music-making in the grand manner...We need to hear more (and ensure the legacy) of this intuitive, pioneering and... — Gramophone Magazine, January 2020 More…

Show 18 remaining works on this recording

Alkan: Etude In A Flat

Hide 18 works on this recording

"In his own words, Raymond Lewenthal was an octave thrower, long-distance arpeggioer and general producer of volcanic rumbles . This hugely talented, extroverted pianist was also a key figure in the revival of a great deal of 19th-century piano music, most of all that of Charles-Valentin Alkan. Sony Classical s new 6-CD collection of Lewenthal s complete recordings for RCA and Columbia Masterworks celebrates this maverick pianist s recorded legacy, with three LPs of material specially remastered from the analogue tapes. Its release comes thirty years after Lewenthal s death in November 1988. Both a showman and a scholar, Lewenthal was born in San Antonio, Texas, in 1923, working as a child movie actor in Hollywood before beginning formal piano study at the age of 15. His teachers included Olga Samaroff and Alfred Cortot. Though his early career in the US flourished after a debut with Dmitri Mitropoulos and the Philadelphia Orchestra in 1948, he withdrew from public performance a few years later after being attacked in Central Park. By the time he returned to concertizing in the 1960s, he had become a champion of Alkan s, much of whose music he edited for publication. His enthusiasm for obscure Romantic repertoire was not limited to Alkan. He revived Adolf von Henselt s little-known Piano Concerto in F minor, a spectacularly difficult work, recording it with Sir Charles Mackerras and the LSO alongside his own version of Liszt s Totentanz. The sheer virtuoso bravura of it all is dazzling , wrote Gramophone. With the same orchestra and conductor Eleazar de Carvalho, he also recorded Anton Rubinstein s Fourth Piano Concerto in D minor, and the dazzling finale to Franz Xaver Scharwenka s Second Concerto in C minor. Two albums of Alkan s solo piano music are a fitting tribute to Lewenthal s obsession; they include his Symphonie, Grande Sonatine and many studies and miniatures. Raymond Lewenthal measures up to Alkan s fearsome demands with expressive gusto , wrote BBC Music Magazine one visionary eccentric pianist channeling the spirit of another. Lewenthal also recorded the Hexaméron, a work written collaboratively by five pianists and put together by Liszt, and now receiving its first CD release Liszt s Réminiscences de Norma ( a revelation Gramophone). One final CD shows another, no less significant side to Lewenthal: several recordings of him discussing works collected here at the keyboard, again never before released on disc. This vital, vivacious communicator a kind of Romantic idol , The New York Times remarked still has a lot to say to us today, about a repertoire that continues to benefit from his passionate advocacy."

All in all, this collection is a must-have for all pianophiles and lovers of music-making in the grand manner...We need to hear more (and ensure the legacy) of this intuitive, pioneering and charismatic pianist.