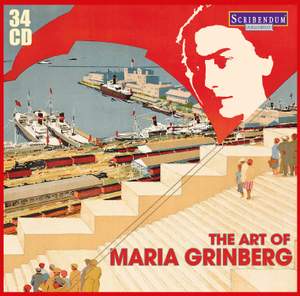 The Art of Maria Grinberg

Soler, A: Keyboard Sonata No. 2 in E flat major

Glinka: Variations on the song The Nightingale by Alexandr Alabiev in E minor

Glinka: Mazurka in A flat major

Shostakovich: Dances of the Dolls

 The first comprehensive tribute to Maria Grinberg, probably one of the greatest pianists of the 20th century

 Her ability to interpret an enormous range of piano music, from Bach to Bartók is finely displayed by the broad spectrum of recordings contained in this set

 This collection will contribute to keep her memory alive after years of neglect in her own Country, where her performances there and her successes abroad were not even advertised, despite her undisputed talent

 Her outstanding performances have been compared by the critics to those of Horowitz, Rubinstein and Clara Haskil