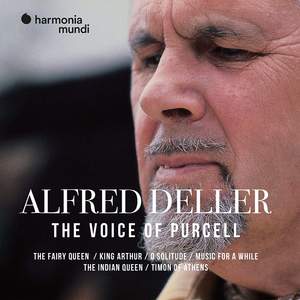 In the semioperas, particularly King Arthur and The Indian Queen, Deller’s role is principally that of conductor rather than singer...The Fairy Queen, recorded with the modern instruments of... — Opera, March 2020 More…

Purcell: My song shall be always, Z31

Purcell: Blow up the trumpet in Sion, Z10

Purcell: I attempt from love's sickness to fly in vain (from The Indian Queen)

Purcell: O lead me to some peaceful gloom (from Bonduca or The British Heroine, Z574)

Purcell: The History of King Richard the Second or The Sicilian Usurper: Retir'd from any mortal's sight, Z581

Purcell: Since the toils and the hazards of war, Z627

The year 1979 saw the death of one of the leading players in the ‘Baroque’ revolution, undoubtedly the most famous countertenor of the Twentieth Century. Alfred Deller had even achieved the supreme tour de force of convincing us that, three centuries earlier, Purcell had composed his songs specifically for him.

With Alfred Deller the public of the 1960s and 1970s discovered not only an absolutely inimitable timbre but also the delights of a repertory that had been slumbering in libraries until then.

Forty years after his death, thanks to the meticulous process of remastering harmonia mundi have carried out on the original tapes, Alfred Deller’s art seems more alive than ever.

Compiles ‘The Fairy Queen’, ‘King Arthur’, ‘O Solitude’, ‘Music For A While’, ‘The Indian Queen’ and ‘Timoeon Of Athens’.

In the semioperas, particularly King Arthur and The Indian Queen, Deller’s role is principally that of conductor rather than singer...The Fairy Queen, recorded with the modern instruments of the Stour Music Orchestra and an over-large chorus, does now sound somewhat dated...Yet Deller’s deep feeling for and understanding of the essence of Purcellian style is never far away, giving much of the music an irresistible rhythmic buoyancy.