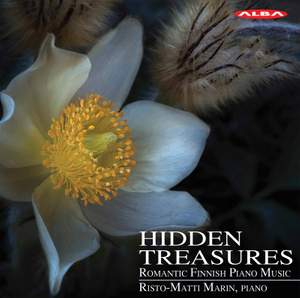 An interesting selection of little known Finnish music; the Hannikainen is the standout. — MusicWeb International, January 2020

Faltin: Variations on an Original Theme

Wegelius: 3 Fantasy Pieces "Memories of a Day in Saxon Switzerland"

For his new album, pianist Risto-Matti Marin has found true forgotten gems in romantic Finnish piano music! Particularly noteworthy are the monumental sonatas by Ilmari Hannikainen and Einari Marvia. Other composers include Sibelius's teachers Martin Wegelius and Richard Faltin, whose works exude the spirit of the golden age of Central European Romanticism. Sirkka Harjunmaa, once a student of Ilmari Hannikainen's, won the second prize at the 1947 Academic Cultural Competition with her fierce etude. Harjunmaa also has a wedding march on the album. None of the album's tracks have been previously released as commercial recordings.

An interesting selection of little known Finnish music; the Hannikainen is the standout.