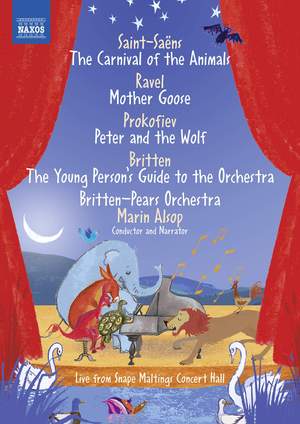 Offer, Saint-Saëns: The Carnival of the Animals

and works by Ravel, Britten and Prokofiev

[The Britten is] the best thing here – vivid, highly commendable playing from the youngsters in a performance that captures all the colour and exuberance of this deservedly popular score. Marin... — Gramophone Magazine, March 2020 More…

These live performances from Snape Maltings Concert Hall present some of the most popular classical works for younger audiences. Their perennial appeal is a result of vivid melodies, witty instrumental characterisation, and, in three works, the use of spoken texts to illuminate the narrative. Whether composed to amuse, entertain or educate, each possesses marvellous vitality, lyricism and bravura. The performances are conducted and narrated by Marin Alsop, one of the world’s most inspirational musical communicators.

[The Britten is] the best thing here – vivid, highly commendable playing from the youngsters in a performance that captures all the colour and exuberance of this deservedly popular score. Marin Alsop’s slightly rewritten version of Eric Crozier’s dry-as-dust original text is just about appealing enough to engage most young persons.

I still find good recordings of children's music like this new one on Naxos quite special...this may be the ideal recording in many ways. I thoroughly recommend this totally enjoyable recording.