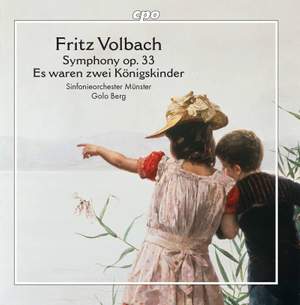 Volbach: Symphony Op. 33 in B minor

Since 2017 Golo Berg has been the general music director of the Münster Symphony Orchestra, which was founded by the composer Fritz Volbach in 1919. It was only logical that Berg would also occupy himself with the composer around this centennial year, and Volbach turned out to be a significant personality both as a musicologist and as a composer. Berg and cpo both were surprised by the originality and high quality of these works. During the first decade of the twentieth century Volbach’s name continued to be thoroughly familiar to people who were interested in music; his works were regularly included in programs, but then they were forgotten somewhat. Volbach’s most popular works included the Symphonic Poem 'Es waren zwei Königskinder' based on the famous folk ballad of the same name. Like Richard Strauss in Till Eulenspiegels lustige Streiche, Volbach drew on this universally familiar material of folk character in response to the turn-of-the-century predilection for German tales and sagas.