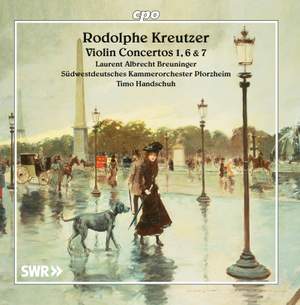 Overall, however, throughout these three concertos, the principles of the French school hold sway, with long-limbed, legato melodies offering welcome timeouts from the running passagework in... — Fanfare, July/August 2020 More…

Kreutzer, R: Violin Concerto No. 7 in A Major

Ten years after the release of the first CD featuring violin concertos by Rodolphe Kreutzer, CPO now releases his Concertos Nos. 1, 6, and 7, again in interpretations by Laurent Albrecht Breuninger. Even today Kreutzer continues to be ranked with the great violin virtuosos of his time and along with Viotti, Rode, and Baillot is regarded as a central figure of the French violin school. As FonoForum wrote of Vol. 1 in 2011, Breuninger 'does outstanding justice to the virtuosic demands. He adds brilliant polish to his solos, absolutely in a manner reminiscent of Paganini'. Kreutzer wrote his nineteen violin concertos during his active years as a virtuoso. After he had found it necessary to abandon his solo career in 1810, he did not compose a single other such work. Although the concertos adhere to the traditional three-movement design, they contain numerous innovative elements, formal surprises, motivic-thematic interdependencies, and genial ideas.

Overall, however, throughout these three concertos, the principles of the French school hold sway, with long-limbed, legato melodies offering welcome timeouts from the running passagework in first movements, songful slow movements, and light, frothy finales..Breuninger’s “four Ts”—tone, technique, temperament, and talent—seem to make him the perfect advocate for Kreutzer’s violin concertos.